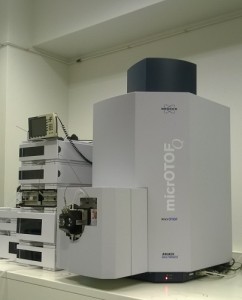 Bruker’s QTOF was installed in the Instrument Centre in 2007. It is a high-resolution hybrid tandem mass spectrometer (QTOF) consisting of quadrupole (Q) and time-of-flight (TOF) mass analyzers. The sample can be introduced through direct infusion or by HPLC. For LC-MS/MS analyses, QTOF is combined with Agilent 1200 series HPLC-DAD system.

After infusion, the compounds are ionized by electrospray ionization (ESI). ESI is a soft ionization technique producing mainly the molecular ions with few fragments. The main advantage of ESI is its ability to produce multiply charged ions which remarkably extend its mass range.

The quadrupole can be operated as an ion guide in MS mode or as a mass selection device in MS/MS mode. TOF has high sensitivity, resolution and mass accuracy. High resolution allows exact mass and molecular formula determinations, also in the MS/MS analyses, where accurate data can be obtained for the fragment ions allowing more precise structure elucidations.